Are you looking for a different experience than usual to live at Jesolo? In that case climb aboard the Jolly Roger, lots of opportunities await you!

Inspired on the ancient galleon of the Republic “Serenissima” between 1500 and 1800, this galleon Venetian born to give you an unique event, sailing the coastline of the Adriatico, between appealing itinerary’s and activities of pure entertainment. 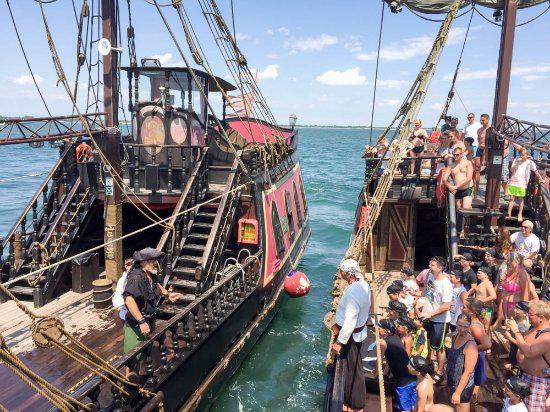 The objective is to give the younger age group excitement that can only be possible falling into the shoes of a genuine pirate, recreating a fascinating and captivating world that today is the strongpoint of the animation on the beach of the Adriatic coast.

On board the Jolly Roger during the summer you can discover the “Pirate Cruise at Sea”, the captivating party for children and adults in a pirate theme, who bring back memories of the raids and attacks of the most famous buccaneers.

After a black tattoo you will transform into a true pirate like Jack Sparrow and Henry Morgan, and after the demonstration with the ropes, playing and dancing, you will launch to the order of the captain in an exciting attack on the enemy galleon with lots of blasts of the cannon and swords, to find the treasure chest.

On the ship you can buy numerous gadgets resembling your favourite buccaneer and buy souvenirs of this exciting adventure, swords, pistols, hooks, bandanna of the Jolly Rodger, bandanna of the pirates and an original photo keepsake!

Where and when do we cast off?

During the summer the captain and his crew of the pirate galleon Jolly Roger will land on the Jesolo Lido beach from Monday to Friday to recruit new bucaniere’s to join the crew.

The cruise lasts 90 minutes and the departure points are Via Bafile (access beach 9). Piazza Trento and Piazzo Nember, consult the leaflet to find out the departure times in the various zones.

The tickets you can purchase with the gadgets directly on board at a cost of 13 euros for children from 1 to 12 years and 16 euros for adults. It’s possible to climb aboard barefooted and dressed for the beach.

Come to the reception and ask for the information you need to start your excursion among the pirates!

Here is a video preview of what awaits you on board.

Have you got any questions?

To ask for more information or book your holiday
Contact us